The trial period has expired please purchase if you like to continue using the theme.
Retailer Spotlight: Gamer's Lair 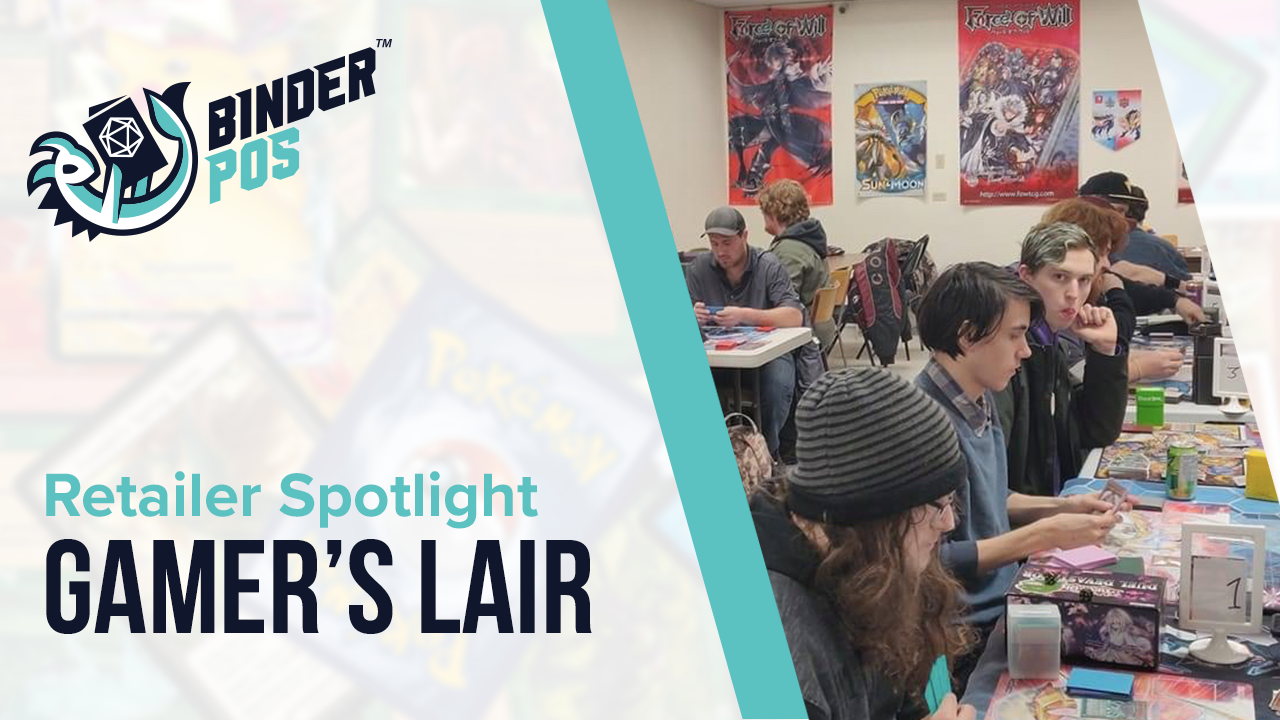 “It was always a home away from home where you could sit down with your friends, play some fun games, open packs, show off your collection. It was a place you could feel welcome.”

Dylan Hunt has gone from customer to Sales Manager at his LGS, Gamer’s Lair, and his passion is infectious. Like a lot of people in the gaming world, he grew up as a player and the career followed. You can tell as he describes the atmosphere and the community he grew up with, that this is something he genuinely loves and cares deeply about.

Gamer’s Lair is nestled on the western edge of Lake Simcoe, Ontario, in the city of Barrie. It’s a small city, an hour north of Toronto and popular with tourists. In 1998 Gamer’s Lair became its latest attraction and has been a local institution ever since. That, however, didn’t mean everything was rosy in the great white north.

“There were some problems for the owners about four years ago and the opportunity came up to run the business,” Dylan explains. “I saw the potential in the business and also enjoyed it a lot myself.”

Dylan took the reins and aimed to improve the reach of the store beyond the borders of Simcoe County. “The biggest thing I wanted to improve on was ecommerce. It’s too bad for a lot of local stores, when you become well-known, and a lot of people want to order from you but it’s not something you can do. That’s a lot of lost business.”

Of course, it’s not as easy as just setting up a website. Becoming a hybrid store (brick & mortar and online) means costs for rent and furniture as well as inventory and shipping.

“Cash flow was the biggest struggle early on,” said Dylan. “It still is now, but not as much.”

His passion made sure he stuck with it. Dylan loves the games he sells and right now, he’s enjoying Flesh and Blood. So are his customers.

“FAB is our biggest success because it didn’t have much following, most people didn’t know what it was, and no other stores offered it when we started stocking it. Everything that happened with it is a result of us getting out there and showing it to people, talking about it online.

I think that’s the biggest indicator we’re doing well with community relations, to go from no one talking about it at all to having consistent 15-20 player turnout is pretty good. Our online community has grown around it too, people are constantly checking us out and asking about it. I’ve never experienced that in such a short timeframe with any other game.”

Community relations, for Dylan, are what make the LGS unique in a world of online megastores and big-box retailers.

“It’s one thing to go to a store and get what you need, but that’s not what you go for. Being honest, for a pack of sleeves, a deckbox, you can get that basically anywhere. It’s the feel, the atmosphere, having a friendly person talk to you about what you like, that’s something that really draws people in.”

The community at Gamer’s Lair is hugely important to Dylan, having grown up in it. Now he is one of the people making sure the atmosphere is right and the customers feel welcome when they walk in the door. That draw of having passionate staff who can talk about the games on sale is great for the customer, but it’s also great for business.

You can absolutely understand why people keep coming back to Gamer’s Lair when Dylan explains how he interacts with curious visitors to the store.

“What makes me smile is when people are in for something totally unrelated and ask what say, Flesh and Blood is about, and I’ll give them a really quick explanation.

‘It’s like Mortal Kombat, you’ve got punches and kicks and you’re fighting to the death with someone else.’

Then they want to know more or even buy a starter deck. That means a lot because they’re genuinely getting value out of what I’m contributing.”

That’s the difference passion provides. It’s what keeps Dylan going when he has to work all night on product releases or events. It’s also helped keep the community going when Covid-19 shuttered the store.

“Obviously the last year there’s been a big barrier between us and the players, we can’t have events, say hi to them, it creates distance. Trying to re-establish that connection is hard. We’ve been having events on Discord, small events where possible, but it’s definitely been a challenge trying to make people feel welcome,” he says, echoing what many store owners must be feeling right now, but he believes the future is bright.

“I think we’ll see a lot of people coming back to playing card games and I look forward to holding some really big events as soon as we can.”

It seems Dylan is as eager as his customers to just play games again after a challenging year. From cashflow issues to a global pandemic, Dylan certainly hasn’t had it easy in his first few years in charge. “It’s not always going to be fun and games. You get what you put into it and it’s very rewarding, but you have to keep working at it.”

With things slowly returning to relative normality, Dylan can go back to cultivating the community at Gamer’s Lair, which he describes as one of the most diverse he has ever seen. His is a place where everyone feels welcome. While he is candid about the difficulties he has experienced, he always comes back to that passion for community and gaming.

“There’s so many memories that we make every day that I honestly wouldn’t trade for anything else.”